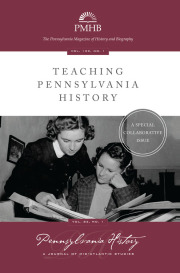 abstract: In the early republic, Americans witnessed the popularization of the natural sciences in the midst of the religious growth of the Second Great Awakening. Inspired by republican rhetoric and natural theology the natural sciences found a broad audience in Philadelphia and throughout the young nation. At museums and public lectures, Americans were invited to inspect the “book of nature”—God’s created universe—up close in an effort to understand the nature of the creator himself. Beyond the elite world of religious scholars and naturalists, this view of science was popularized among Americans as a benefit to the republican moral order as well. This article looks at the ways in which that understanding of the relationship between science and religion was packaged and marketed to the citizens of Philadelphia and the broader United States as the key to preserving the moral and civic order required for a strong republic.